Matteo’s Bakery and Custom Cakes is a small family owned bakery, located in North Kingstown, RI at 820 Boston Neck Road. Named after Antonio & Leyla’s son Matteo, they offer a wide selection of pastries, bread, and custom cakes that are baked fresh every morning by Antonio himself! They also offer fresh, locally roasted coffee and a warm, friendly environment. While the food is undoubtedly amazing, the story behind the establishment of Matteo’s is even more impressive! 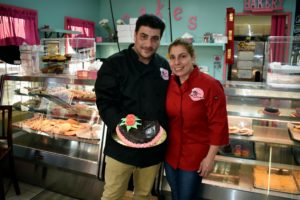 A Family With Baking in Their Blood

Antonio was born on the island of Sicily but moved to Rhode Island with his father when he was just a child. After moving to RI, his father purchased a small bakery in the city of Providence. Growing up above his father’s bakery gave him the opportunity to discover his passion for baking as a young boy, and he’s been in the industry ever since! Unfortunately, his father fell ill and they were forced to close their doors after 31 years of success. Over the years, Antonio worked to perfect his craft in numerous bakeries on Federal Hill, and also met his wife Leyla.

Leyla was born and raised in Bolivia, working as a professional cake decorator before moving to the US. The couple met when Leyla applied to be a cake decorator at the bakery Antonio was working for at the time. When their former employer noticed the chemistry between Leyla and Antonio, they were prohibited from dating as coworkers. The couple refused to allow this roadblock to get in the way of their love. They shared the dream of opening a bakery of their own, and saw this as an opportunity to fulfill the dream together! The family packed their bags the same day and moved in above the store! Antonio and Leyla’s hard work and dedication has certainly paid off, proving dreams really can come true. Baking is integrated into the makeup of this self-made family, allowing Matteo to follow in his father’s footsteps!

Easter Sunday will mark the one year anniversary of Matteo’s and serves as a token of their success. It will also be one of their busiest days of the year, spent fulfilling orders for holiday desserts. No matter what kind of pastry you purchase, it’ll be a definite hit at any gathering!  Supporting local businesses has always been important to me and I’m so glad to see them doing so well! Keep up the great work guys! One last thing - be sure to stop in on Saint Joseph’s Day to pick up the most delicious Zeppole you have ever tasted. 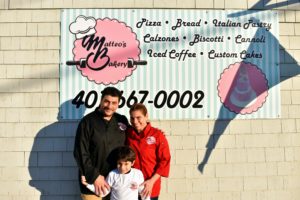